A miniature park is a wide open area displaying miniature buildings and models. The whole concept is to gather all the replicas of famous buildings, attractions, artworks, towns or cities in shape of a very midget model. Today there are large numbers of miniature parks allow people to visit some famous sites around the world in just on place. Here is some miniature parks that could be worthy of your enjoyment:

1. Legoland: Legoland or also known as Legoland Billund is one of the most famous tourist attraction theme parks located right next to the Lego factory in Danish capital city Copenhagen. This park opened in 1968, and at the heart of this park, there is a miniature model of a Lego city which is the main attraction for many tourists. There are many parts like moving trains, boats, and other vehicles which make this whole thing more realistic. According to the statistics, more than 50 million tourists have visited this park till 2012 since its opening day, and Legoland become the largest tourist attraction in Copenhagen.

2. Madurodam: Madurodam is a 1.25 scale model of a small Dutch town located in Scheveningen district of Den Hague in the Netherlands. This model replicates the brief history of Dutch civilization and developments in small villages and towns. It consists of famous Dutch windmills, canals, floating market, an ancient building with a slight and elegant touch of Dutch architecture, the port and coastal district of Rotterdam, etc. This park was inaugurated in 1952, and since then it has been a major tourist attraction in the Netherlands. In 2012 this park celebrated their 60th anniversary and on that occasion authority of this park made a major contribution to various Netherland’s charities.

3. Queens Art Museum: The Queen Art Museum is one of the most famous tourist spots in the USA. It is a whole panoramic miniature model of the New York city with its very famous skyline, and this model is divided into 5 boroughs. This model depicts every single building of the New York city that was made before 1992. It took three years and 100 artists and workers to change 60,000 building structures in 2009. As an example, the twin tower of the World Trade center was replaced with a single tower.

4. Roman Civilization Museum: In Italian, they call it Museo Della Civita Romana. This museum is one of Rome’s most popular travel destinations where the history of Roman Civilization is stored. And many Hollywood movie’s shooting were done here. The idea of this museum came from Fascist dictator Benito Mussolini and main artist of this museum was Italo Gismondi. It is a 66*66 feet model that depicts the glorious history of ancient Roman civilization from 4th century during the ruling period of Constantine 1.

5. World Square, Tobu: Japan is believed to be the country from where the idea of miniature park was imported and Tobu World Square is the most famous miniature park in the land of rising sun. This is 1.250 scale miniature park that consist Buckingham Palace, Eiffel Tower, Pyramid of Giza and many other famous spots. It took more than five years to complete, and it is almost taller than 85 ft. 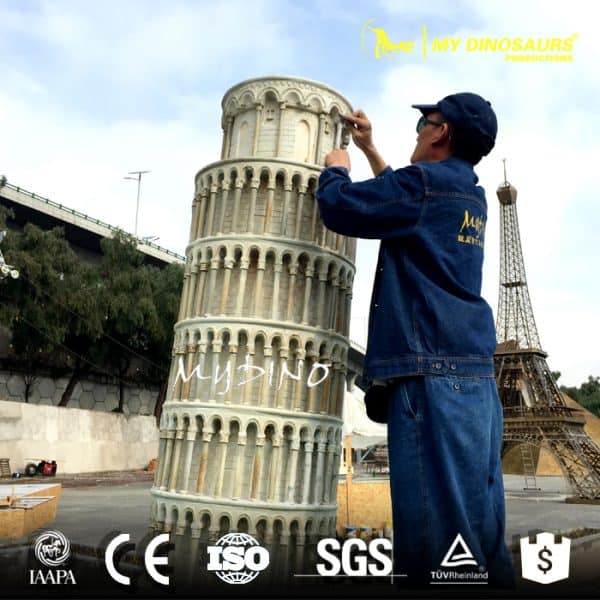 6. Miniaturk: Miniaturk is the largest miniature model in the world which is located in Istanbul, Turkey. It includes more than 105 models of historic buildings, castles, monuments from Istanbul, Ankara and former Selcuk and Ottoman Empire. This miniature park is also made in 1.25 scales. Artemis temple (Ĕuphesus) and Halicarnassus Mausoleum, two great structures are also featured in this miniature park.

7. Bourton on the water: Bourton on the water is a British old-school miniature park model situated beside the bank of river Windrush, district of Cotswold in Gloucestershire County. This is a model that covers the designs of old English homes, factories, and bridges over Windrush. It opened in 1937 with long history and it became one of the most popular tourist spots in England.

8. The window of the World: Window of the world is situated in the western part of the Chinese city Shenzhen. There are more than 130 replicas presented there including a 354 ft tall Eiffel Tower replica and some other replicas like Taj Mahal, Statue of Liberty.

9. Dos Pequenitos: Dos Pequenitos is a famous miniature park in Santa Clara de Castelo Viegas, Coimbra, Portugal. It features a brief history of the civilization of Portuguese districts and the capital Lisbon. There are many twisted details about Portuguese inventors and their ships.

10. Le Peite: Le Petite is a miniature park at Tarn-et-Garrone, Vaissac, Paris that shows the whole structure and skyline of the French Capital. It took 14 years to finish and finally in 1983 it opened for the visitors.

Miniature parks are interesting for both children and adults and they bring the world closer together. Above places are examples of the most amazing miniature parks in the world. If you are planning to visit miniature parks, make sure to check these places out.