As a general rule, you wouldn’t want to cross paths with any of the dinosaurs that lived during the Mesozoic Era—but the fact remains that some species were much more dangerous than others. In the following introduction, you’ll discover ten kinds of dinosaurs that could turn you into lunch (or a flattened, quivering pile of bones and internal organs) faster than you can say “Jurassic World.”

1. Stegosaurus
You might not expect to encounter a small-headed, small-brained plant-eater like Stegosaurus on a list of the world’s deadliest dinosaurs—but focus your attention on the other side of this herbivore’s body, and you’ll see a dangerously spiked tail that could easily bash in the skull of a hungry Allosaurus. These quadrupeds had short forelimbs and long hind limbs. The distinctive combination tail tipped with spikes was used for defense against predators while the upright plates were used for thermoregulatory functions. 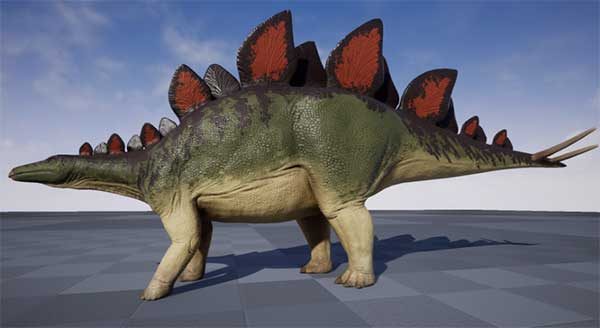 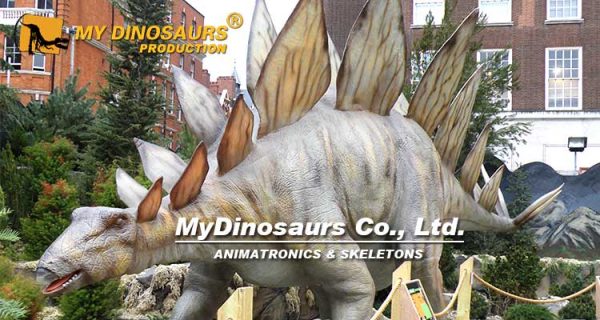 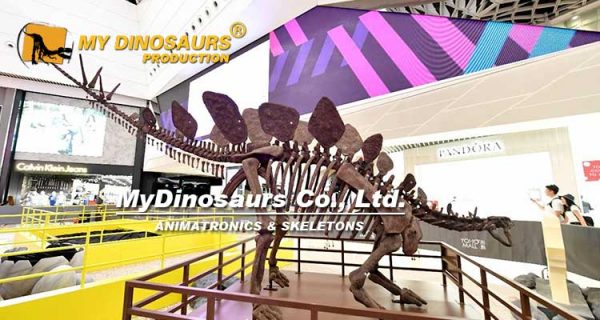 The Spiked Tail of Stegosaurus

2. Spinosaurus
In roughly the same weight class as Giganotosaurus and Tyrannosaurus rex, the northern African Spinosaurus was blessed with an additional evolutionary advantage: It’s the world’s first identified swimming dinosaur. This 10-ton predator spent its days in and around rivers, pinning fish between its massive, crocodile-like jaws and occasionally surfacing like a shark to terrorize smaller, land-bound dinosaurs. Spinosaurus may even have tangled occasionally with the comparably sized crocodile Sarcosuchus, aka the “SuperCroc,” surely one of the epic matchups of the middle Cretaceous period. 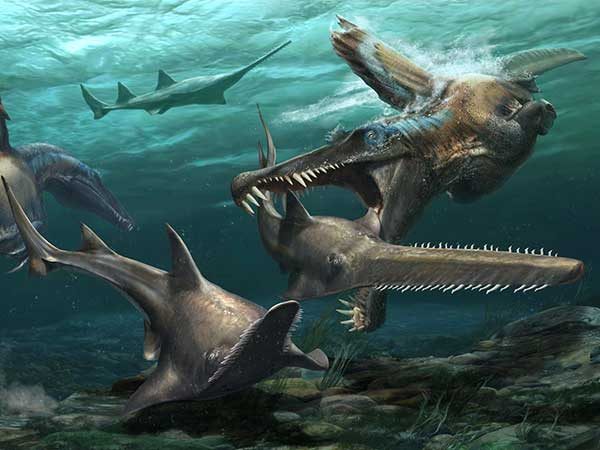 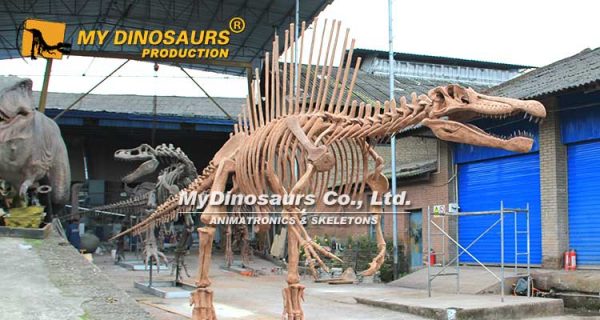 3. Majungasaurus
Majungasaurus, once known as Majungatholus, has been dubbed the cannibal dinosaur by the press, and even though this may be overstating the case, that doesn’t mean this carnivore’s reputation is entirely unearned. The discovery of ancient Majungasaurus bones bearing equally ancient Majungasaurus tooth marks is a good indication that these one-ton theropods preyed on others of their kind (hunting them down when they were very hungry and maybe even feasting on their remains if they found them dead). Although, it seems that this predator spent most of its time terrifying the smaller, quivering, plant-eating dinosaurs of late Cretaceous Africa. 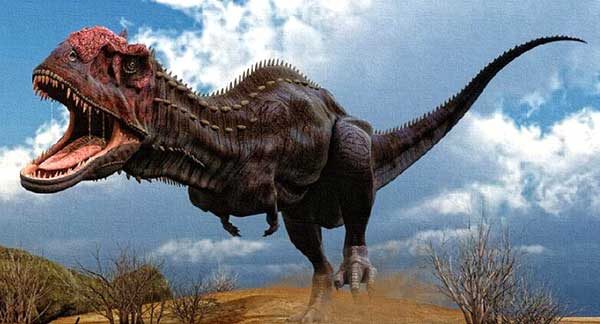 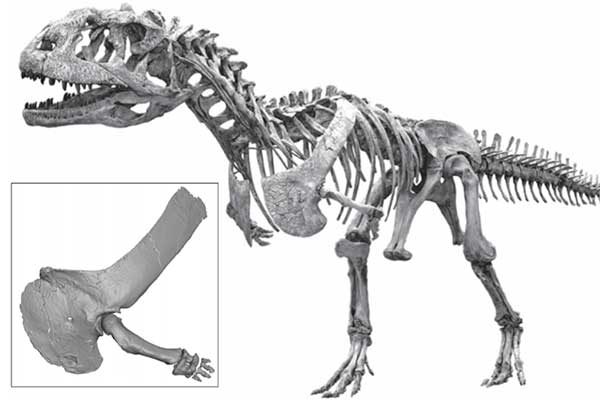 Tiny forelimbs, similar to the T-rex

4. Ankylosaurus
Similar to Stegosaurus, People might not consider the herbivore Ankylosaurus deadly, but this armored dinosaur had a knobby hundred-pound tail that was used both for defense and attack purposes. This heavy tail was Ankylosaurus’ strength and could generate enough force to crush the enemy’s bones once swung around. Experts believe Ankylosaurus could cause massive damage to the T-rex by a well-aimed swing of its massive tail. This ability was enough to create havoc and maintain its fierceness in the region. 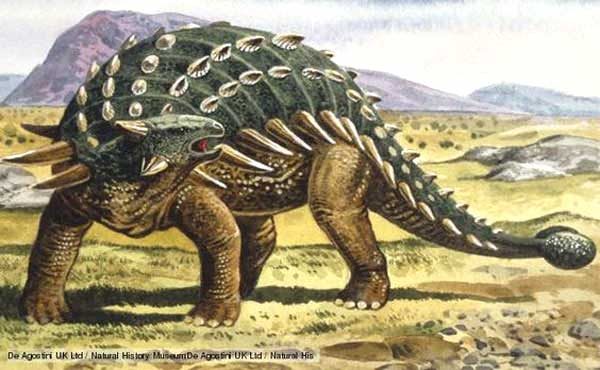 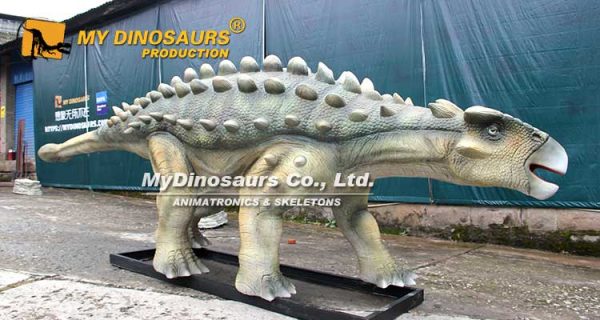 5. Allosaurus
It can be, well, deadly to speculate about how many individuals existed at any given time for any given dinosaur genus, based solely on the fossil evidence. But if we agree to make that imaginative leap, then Allosaurus was a far deadlier predator than the (much later) Tyrannosaurus rex—numerous specimens of this fierce, strong-jawed, three-ton meat-eater have been discovered across the western United States. As deadly as it was, though, Allosaurus wasn’t very smart—for example, a group of adults perished in a single quarry in Utah, mired in deep muck as they salivated over already-trapped and struggling prey. 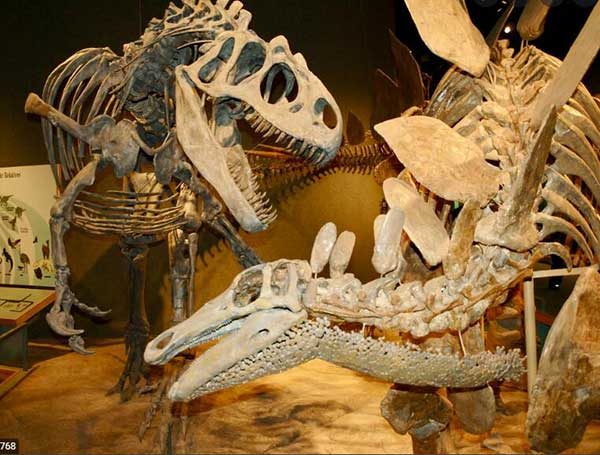 Allosaurus vs Stegosaurus, at Denver Museum

6. Diplodocus
Surely, you must be thinking, Diplodocus doesn’t belong on a list of the world’s deadliest dinosaurs. Diplodocus, that gentle, long-necked, and invariably mispronounced plant-eater of the late Jurassic period? Well, the fact is that this 100-foot-long sauropod was equipped with a slender, 20-foot-long tail that (some paleontologists believe) could crack like a whip, at hypersonic speeds, to keep predators like Allosaurus at bay. Of course, Diplodocus (not to mention the contemporaneous Brachiosaurus and Apatosaurus) could simply squish its enemies flat with a well-placed stomp of its hind foot, but that’s a much less cinematic scenario. 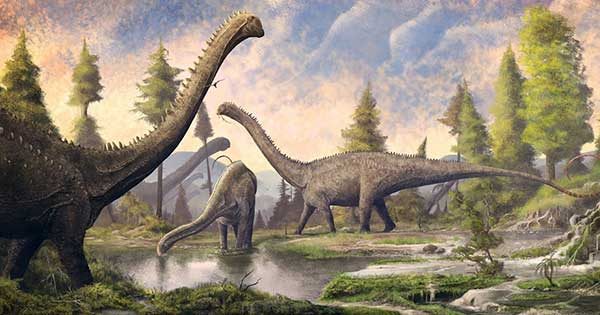 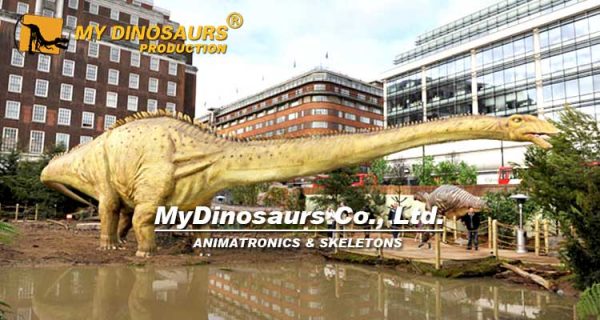 7. Giganotosaurus
Isn’t the name gigantic in itself? It also meant the “giant southern lizard”. Discovered by an amateur fossil hunter namely, Ruben Dario Carolini, on 25th of July 1993 in deposits of Patagonia, this giant monster is argued to have resided in Argentina during the late cretaceous period. Belonging to the genus of carcharodontosaurid dinosaurs. This big boy had a length of skull almost comparable to that of a T-REX. They were carnivores by nature. In size, it was bigger than the Carcharodontosaurus but not as large as the spinosaurus. 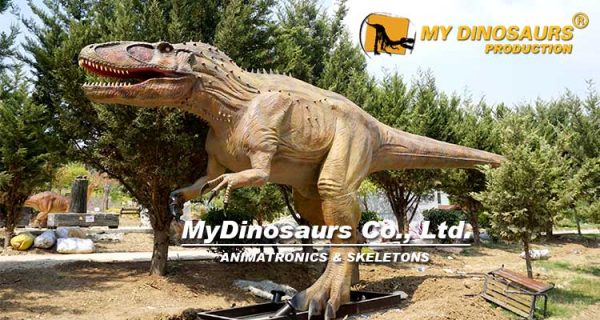 8. Kronosaurus:
The name Kronosaurus meant lizard of Kronos, it was named after the leader of Greek Titans “CRONUS”. It was a short-necked It was a marine reptile and had a head that was elongated and a stiff body. It moved throughout the waters using its four-flippers. It was a very fast and active swimmer and measured around 30 to 32 feet in length. It was supposed to be residing in Australia and Colombia. They were carnivores in nature and had an appetite for turtles and plesiosaurs. It also supposedly loved to feed on giant squids. 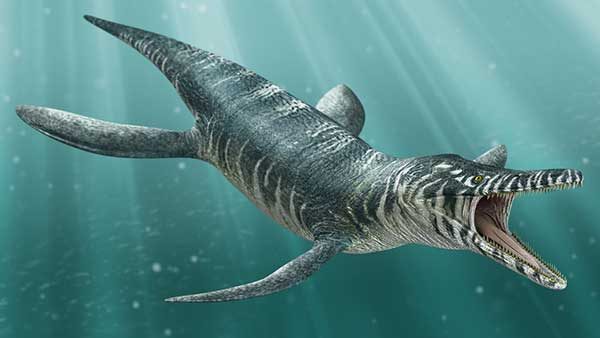 9. Tyrannosaurus:
Yes, the T-Rex, that everyone had been waiting for. Their name is meaning the Tyrant Lizard, which they definitely were, these lizards homed up at Laramidia, now western North America. Belonging to the genus of Coelurosaurian Theropod dinosaur, these not so gentle monsters were a menace. With bird-sized brains, they created more havoc than could have been repaired. One of the largest land predators these dinosaurs could have a length of 40 ft. And the weight of about 6.8 metric tonnes. It was an opportunist carnivore. Could turn into a scavenger from a predator anytime it needed. 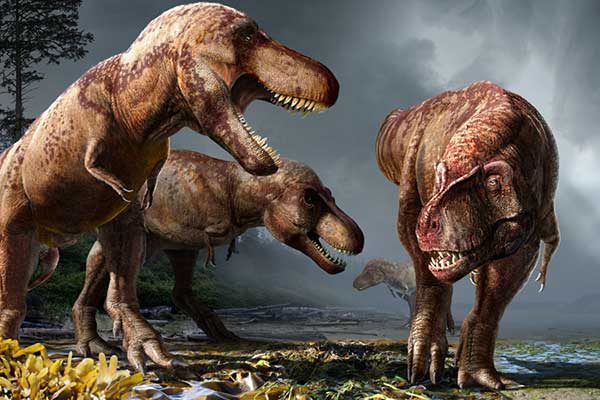 10. Velociraptor:
Star of the infamous kitchen scene in Jurassic Park, the curious creature with the deadly curved toe claw has been terrorising nightmares for two decades.
The film may have overstated their size and stripped them of their feathers, but it did get some things right: Velociraptors (“vel-OSS-e-RAP-tors”) were fast and polished predators that oozed agility and intelligence and may have hunted in packs. 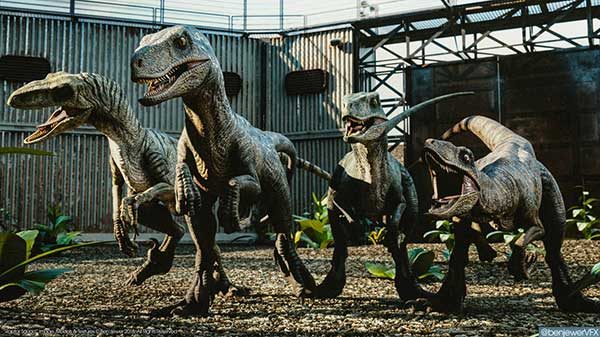 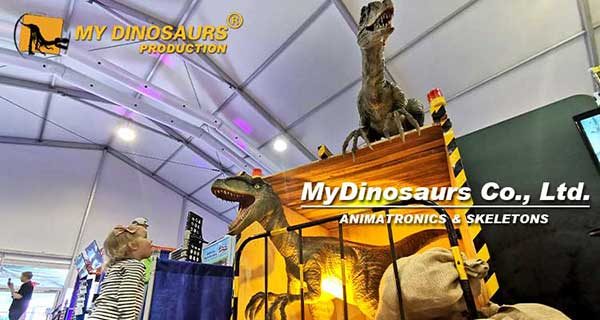