Dinosaur is that kind of item which intrigues everybody, They remind people of the great mysterious past world. Dinosaurs were discovered through fossils excavations and since then the interests have been on-going. Museums around the world have put up displays of dinosaurs bones. Historians and palaeontologists are working day and night to dig up new information about dinosaurs. New facts are being unearthed every day and they are quite wacky. The craze for the dinosaurs isn’t dying off soon and that can be said with surety.

Films and books like Jurassic Park and The Good Dinosaurs have intrigued people even more. Kids love the concept of dinosaurs and museums with bone are quite boring for them. They want something fun and innovative so that it can become interactive, such as some robotic animatronic dinosaurs. There have been numerous theme parks designed in the recent years that would give visitors the experience with dinosaurs. But have you imagined that you can meet dinosaurs in hotels? A hotel with Dinosaurs will bring you a lot of fun and it makes your stay at the hotel more pleasurable and memorable. 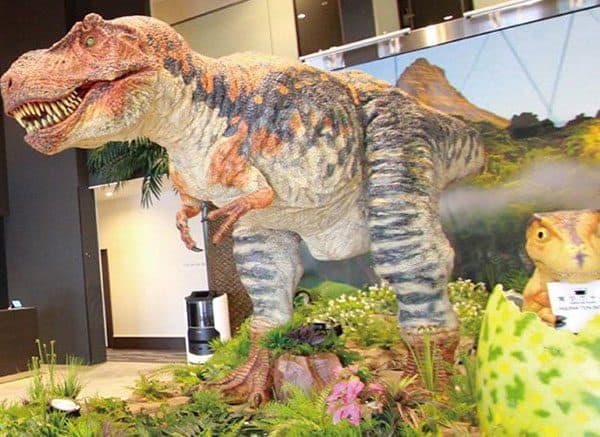 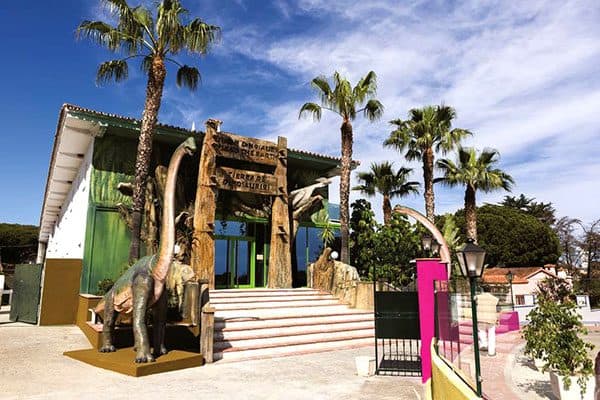 Hotels that are set up with Dinosaur themes

The biggest reputation has been made by two hotels placed at opposite directions in the world. One is found at Denver whereas the other at Japan. Both the hotels have been beautifully made to attract the guests and also give them a different experience. The set ups have been done in the best way possible to give them a realistic touch. Both the places are quite worthy of visiting if someone has that kind of a budget. So let us know about the hotels a little bit more.

The Best Western or the Dino Hotel of South-west Denver

This hotel has revamped them by spending 5 million Dollars to change into a dinosaur lover’s heaven. The hotel has a dinosaur theme and everything has been done perfectly. The owners are Greg and Meredith Tally who were bored on their former theme of the hotel. They though that the best thing to make their hotel was to give it a pre-historic theme. This was a well thought out plan as Denver has been great for providing many Jurassic evidences to the world. The hotel is situated quite close to a museum the Morrison Natural History Museum and Dinosaur Ridge whose curators helped the couple in revamping their hotel.

The hotel has everything from real fossils to dinosaur replicas to make the experience as realistic as possible. They have a bar called the Paleo Joe’s Bar which has been made from petrified wood which gives an excellent ambience. There is a full size Tylosaur fixed in the ceiling of the bar and it appears to be swimming. The front of the hotel has several sand pits where kids can go fossils hunting. Stanley the Stegosaurus is also present in the front and it is a fibreglass model which looks quite attractive.
The lobby of the hotel is the most intriguing place as it is filled with dinosaur related things. An Eusmilus and an Australopithecus skull is displayed in the lobby area as conversation starters. Numerous pre-historic fossil and animal related things can be seen at the hotel. The lobby has a rustic touch to it and by the side of the front desk a Stegosauruses skull can be seen. The hotels outside walls have been filled by murals made by Tom Ward. The notable pieces include a mammoth, a T-Rex and a time spiral. The interior stairway walls also have fascinating murals. A Brachiosaurus leg can also be seen in the hotel. In the entire hotel is a perfect destination for people who want to experience the world of dinosaurs and also check out the excavation sites present in Denver. 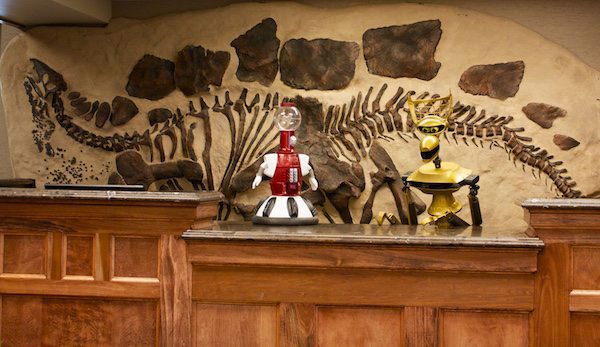 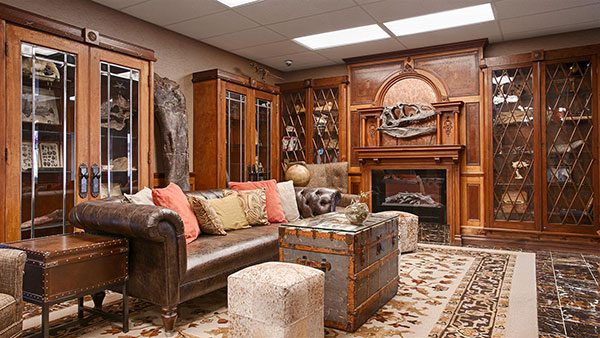 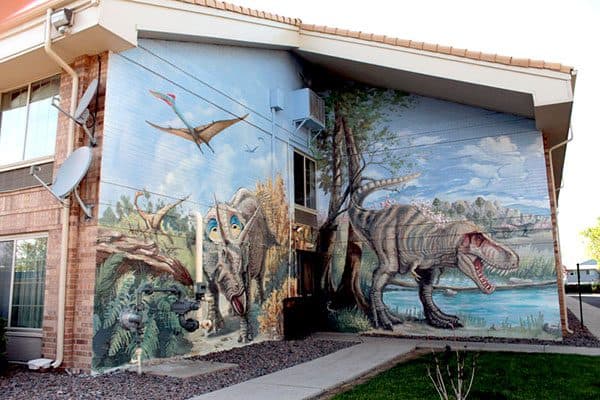 This hotel is very different when compared to the above mentioned hotel. This hotel is quite technological and futuristic in its approach at it uses robots to run the hotel. The experience of the guests is totally new and they meet robot dinosaurs as soon as they enter the hotel. A velociraptor wearing a bow tie is a receptionist along with a sweet looking girl robot. The robots are multi-lingual which comes handy as the hotel attracts tourists from all around the world. The owner of the hotel is Hideo Sawada who wanted to make the hotel very efficient. He made it happen by utilising robots as the 90% working staff.

A giant mechanical arm is also present to manage the luggage of people and robot trolleys are available for luxury wing users. The rooms use facial recognition to accept guests. Every bedside has a robot creature designed as a dinosaur egg to set everything for the guest in the room. The robot can also help you in choosing a song according to your mood.

The hotel has been made energy efficient and environmental friendly for a better future. Reducing waste and taking up an eco-friendly approach is also their motto. There are mainly three types of rooms available, Standard, Superior and Deluxe. The hotel has 5 wings with several rooms in it. The Air-conditioner is innovative and energy efficient and produces air and heat that are quite close to natural air and radiation. There are several services that a person can make use of and the hotel’s website has all the information. The hotel check in is at 3 PM and check out is at 11 AM. The hotel is an apt destination to visit if someone loves robots. The owner says that he would love to spread the hotel throughout the world. 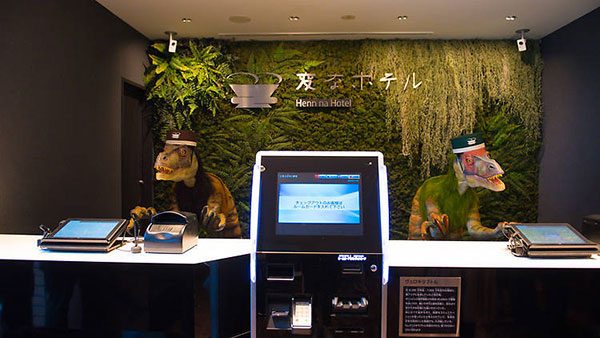 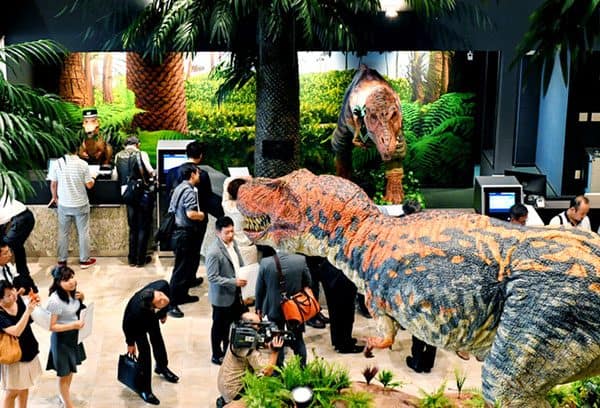 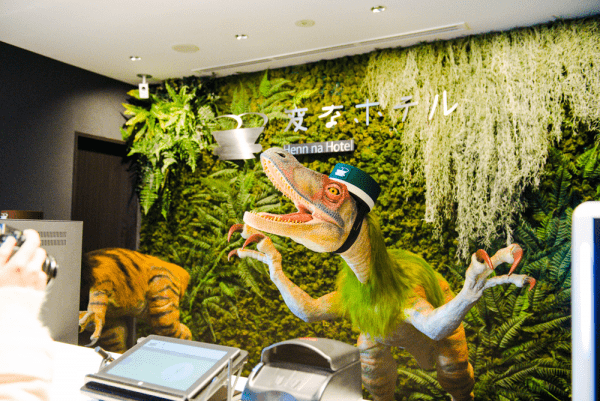 The two places are quite innovative in their own ways. One portrays the history and another upcoming future. So people enthusiastic in dinosaurs can visit the two places to have a great stay. Kids would love both the places and thoroughly enjoy the interactive feel that they have in store for them.