Enormous animatronic monsters have arrived before the opening of a world-first predators exhibition.

The Chester Zoo in the United Kingdom shipped a batch of giant animal models from the United States in early May for the upcoming prehistoric Predators exhibition. When carrying the model, the staff and the lifelike “dinosaurs” looked funny in the same frame, thinking that the dinosaurs reappeared in the world. These wild beasts that once dominated the land in the Jurassic era still have an irreplaceable attraction to humans even today, and “lurking” around us in various forms, waiting for opportunities. 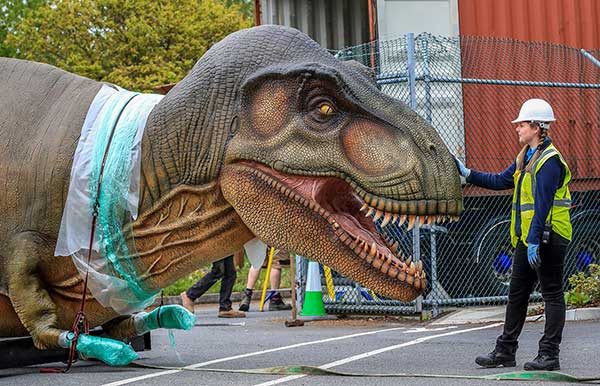 A fierce “tyrannosaurus” arrived in the UK and will participate in an exhibition held at the end of May. 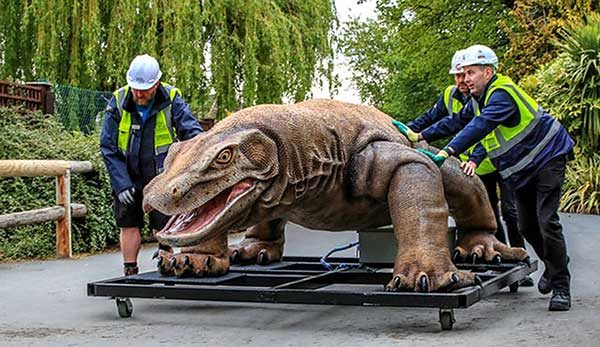 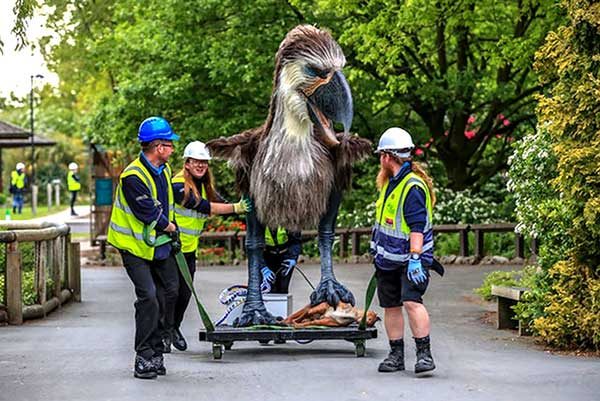 The partners who came with the “Tyrannosaurus Rex” also included extinct carnivorous animal models such as the Dilophosaurus, the Megalania, and the Phorusrhacidae. 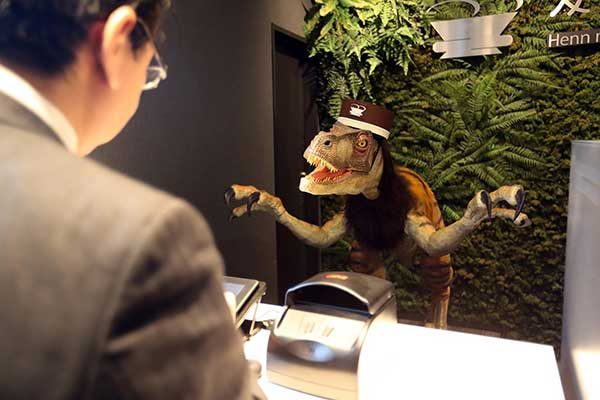 “Prehistoric creature” in modern times may be able to do more than you can imagine. A hotel near Tokyo Disneyland in Japan uses dinosaur robots to receive tourists. In addition to rooms equipped with artificial intelligence robots, the hotel front desk also arranges “dinosaur” waiters, and guests follow their guidance. Go through the procedures through voice recognition and touch screen. 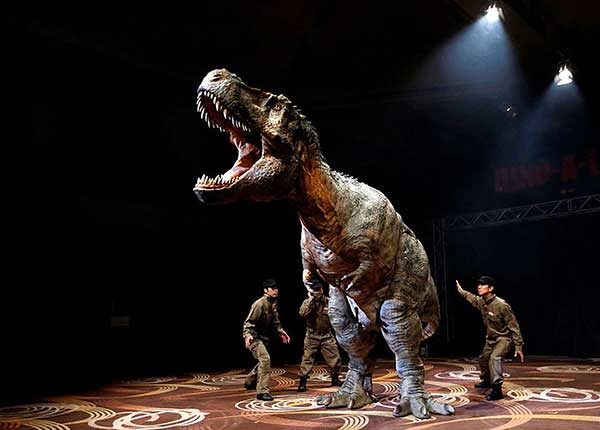 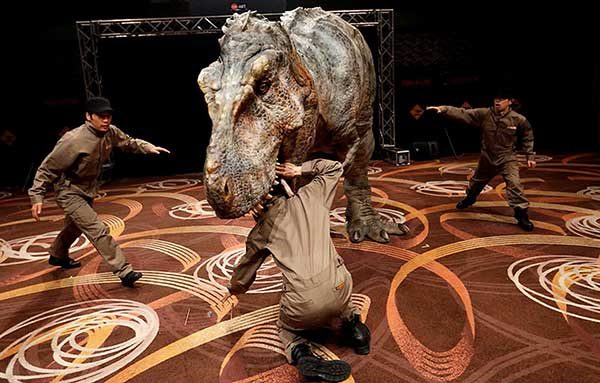 When the 8-meter-long animatronic dinosaur robot produced by the Japanese company On-Art appeared in Tokyo, it caused viewers to “panic” with its realistic appearance. These robotic dinosaurs can simulate the behavior and calls of real dinosaurs, and cooperate with the vivid performances of the staff to instantly bring you back to the dinosaur era. 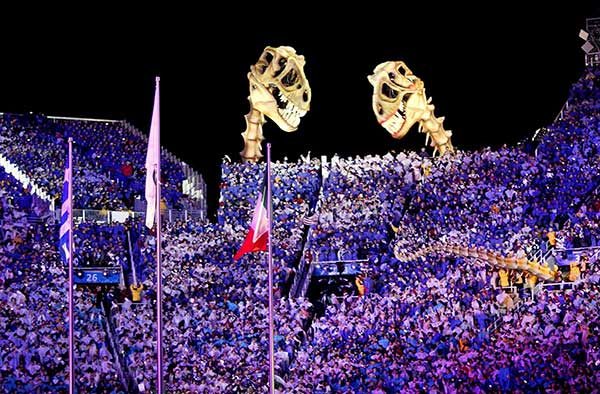 At the closing ceremony of the Winter Olympics held in Salt Lake City, Utah, USA, two dinosaur skeletons appeared on the scene, dancing with the crowd, and celebrating. 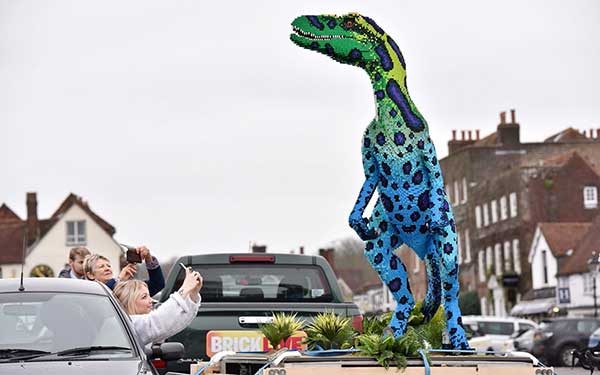 A velociraptor sculpture made of more than 60,000 Lego bricks caused “commotion” on its way to Marville Zoo near Winchester, England. It is 7 feet long with bright colors and quickly attracted people’s attention, and one after another raised their phones to take pictures. 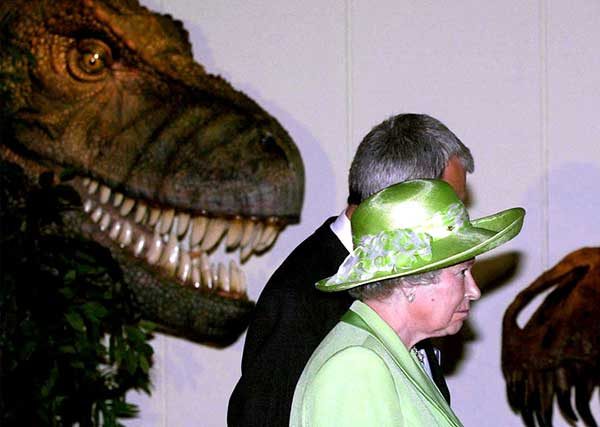 Not only are they in the same frame as ordinary people, but dinosaurs often appear around royal families and dignitaries. Queen Elizabeth II of England was spied by a “dinosaur” when visiting the Yorkshire Museum. 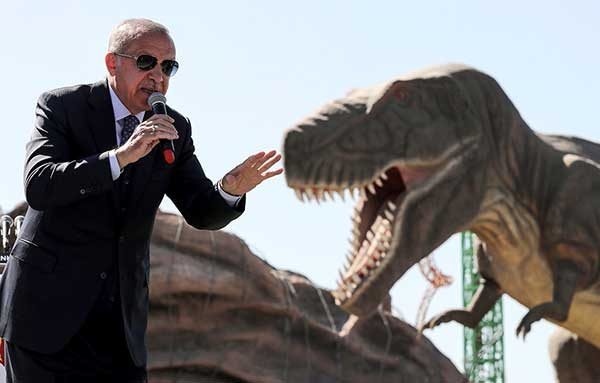 In March of this year, the opening ceremony of the “Wonderland Eurasia” theme park was held in Ankara, Turkey, during which President Erdogan and a “dinosaur” gave a speech on the same stage.

MyDinosaurs is a world-leading animatronic model manufacturer from China, more than 25 years of manufacturing and export experience, we provide a one-stop service for your dream park.