Even though dinosaurs became extinct millions of years ago, we are still fascinated by those enormous, reptilian-like animals which used to rule our planet long before human existed. The popular Jurassic Park films by Steven Spielberg Ignited our interest regarding these mysterious creatures. Owing to the massive popularity of dinosaurs among everyone, a dinosaur-themed decoration is a good strategy to attract more visitors to your cinema hall.

Here are some dinosaur-themed decoration ideas for your cinema hall.

One of the most famous dinosaurs in Steven Spielberg’s Jurassic Park series is the Tyrannosaurus, also known as T-Rex, which is a coelurosaurian theropod dinosaur. It is among the largest known land predators and is also speculated to have exerted the largest bite force among all terrestrial animals. A 20 inches tall T-Rex dinosaur statue will surely delight the fans of the Jurassic Park franchise. Realistically sculpted with rows of menacing Raptor teeth, a fearsome dinosaur tail and scaly skin – this dinosaur statue will take the audience back to the Mesozoic Era. 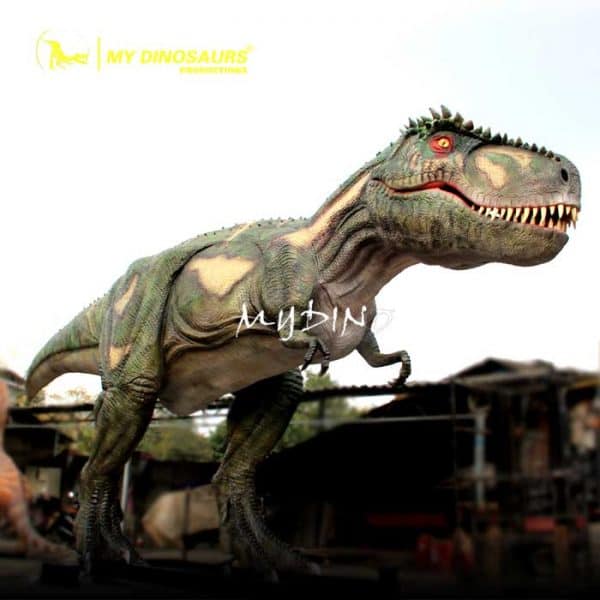 Velociraptor was a bipedal, carnivore with a long tail and an enlarged sickle-shaped claw on each hind foot, which was used to tackle and disembowel prey. In all the films of the Jurassic Park franchise, Velociraptor was one of the most commonly seen dinosaurs on the islands. They were portrayed as the most intelligent and one of the most vicious of all the dinosaurs throughout the film series. Placing a velociraptor will surely attract a lot of attention from the moviegoers.

Jurassic Park III scientific advisor, Jack Horner, decided to retire the T. rex after its appearance in the previous two films, and brought Spinosaurus into the third film. Spinosaurus (meaning: Spine lizard) was a theropod dinosaur that lived in prehistoric North Africa, during the upper Albian to upper Turonian stages of the Cretaceous period, about 112 million years ago. It had a long and narrow skull, somewhat similar to that of a modern crocodilian. It was among the largest of all known terrestrial carnivorous dinosaurs, even larger than Tyrannosaurus Rex, which it briefly defeated in the film!

Pteranodon lived during the late Cretaceous period of North America.  It had a wingspan of up to 20 feet, and its flight pattern resembled that of a large sea-bird. The Pteranodon possessed a kite-like body and wing structure, and a streamlined beak and crest. It was an airborne monster built for speed. Spook your audience with a hanging Pteranodon statue made of fiberglass and attached to the ceiling. They also make a notable appearance in Jurassic World.

The term Triceratops means “three-horned face.”  It possessed a large skull that took up a third of its entire body. It had three horns and backward-pointing frill, which were used as defensive weapons against Late Cretaceous predators. This is why the Triceratops is often regarded as one of the most dangerous herbivorous dinosaurs who was well equipped to fight even the T. Rex. A Jurassic-sized, realistically sculpted and intricately designed Triceratops statue will be loved by dinosaur lovers. And we can see them in may dinosaur themed movies.

Stegosaurus was a thyreophoran dinosaur that existed almost 150 million years ago during the late Jurassic period. It was a large and heavily built, herbivorous quadrupeds with rounded backs, short forelimbs and long hind limbs.  Stegosaurus is one of the most recognizable dinosaurs because of its unique tail spikes (thagomizer) and defensive spine plates. A realistic Stegosaurus dinosaur display with life-like eyes made out of high-quality cold cast resin will make a super decoration to any cinema hall. 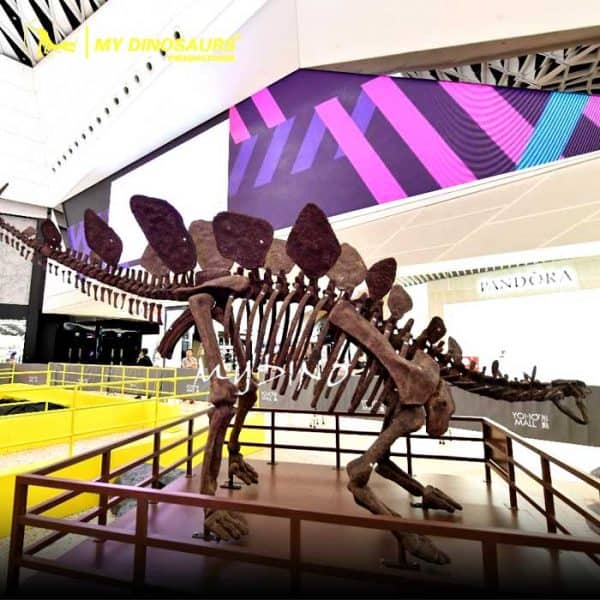 The Brachiosaurus was the first dinosaur to appear in the film (with the exception of the Velociraptor in the beginning) in what Empire called the 28th most magical moment in cinema. It was one of the tallest and largest dinosaurs ever found. Brachiosaurus weighed nearly 80 tons, and its front legs were taller than the back legs. It had a very long neck resembling a modern-day giraffe, small skull, and large overall size. A prehistoric replica dinosaur statue cast in high-quality resin, hand-painted colors and detailed texture will transform cinema halls and make it into something truly magnificent.

Allosaurus became the first dinosaur movie star after its appearance in the 1925 all-dinosaur film, Lost World. It was a large bipedal predator with a large skull and possessed dozens of sharp, serrated teeth. A fierce Allosaurus head extending 23 inches from the wall with a realistically sculpted head and a powerful carnivorous stare, this statue make a prehistoric statement piece.

Apatosaurus was a large, long-necked, quadrupedal animal with a long, whip-like tail. Its forelimbs were slightly shorter than its hindlimbs. Apatosaurus makes brief appearances in Jurassic World, but it is the main role in the popular cartoon movie The Good Dinosaur, a 2015 American 3D computer-animated comedy-drama adventure film.
Mouth-Open Dinosaur Head Entrance:
While people come through the mouth-open dinosaur head entrance, they will get more adventure joy. With realistic sound effect, visitors must be touched by the Jurassic themed decoration.

A wall-mounted scary animatronic dinosaur head is a popular decoration for cinemas. A animatronic head can rotate, and the mouth can open with smoke and light. There are more fancy effects for you to discover. Put your head inside this wall mounted dinosaur’s mouth and take photos!
The right type of decoration can go a long way in attracting more visitors to your cinema hall. These dinosaur-themed decorations will surely enhance your audience’s movie watching experience and transfer them to the prehistoric times.