Do You Really Know Dinosaur Footprint?

Dinosaur footprints still exist on this planet! Dinosaurs stepped into the mud and left impressions millions of years ago that are known as “ichnites.” Ichnites are trace fossils that let us see inside the lives of dinosaurs. Fortunately for us, these dinosaurs’ footprints didn’t wash away after millions of years passed, so we have them all over the world to study and learn from even now. 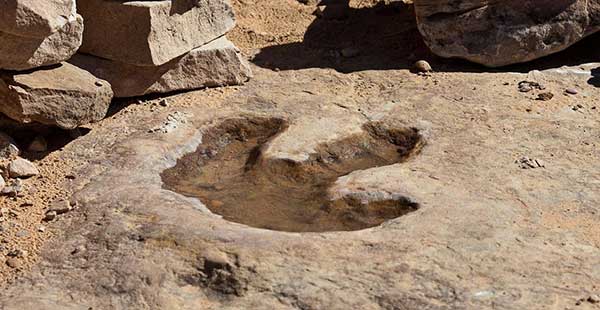 How Do Fossil Footprints Form?

As the dinosaurs stepped onto the ground, they left impressions that are called “tracks.” The piece of ground that is directly affected is called the “true track.” With each step, the dinosaur compressed the ground, and specific signs below the true track began to form. The specific signs have several names, including transmitted tracks, ghost prints, underprints, and undertracks.

A dinosaur can leave a print as large as a centimeter or even a meter. These prints have been preserved for so long that you can find the tracks as well as the undertracks.

Not all dinosaur tracks fossilize. Those that fossilized did so because the ground was in the right condition to preserve the perfect shape, the perfect size, and the perfect depth. This type of ground must not be too hard because if it is, the print wouldn’t be very deep, and it wouldn’t be able to leave very much detail. In contrast, if the ground is too soft, the dinosaur’s foot couldn’t leave a perfect print because it would collapse and easily erode.

When the right conditions are present, the sun has the opportunity to bake the dinosaur footer prints into the ground that will last for a long period of time.

How Many Types of Dinosaur Footprints Have Been Found?

Paleontologists found several types of dinosaur footprints in Western Australia. The largest tracks they found belong to a group known as the “Sauropods.” These dinosaurs had long tails, long necks and were herbivores. The group also discovered tracks that came from ornithopod dinosaurs. They even discovered a Stegosaurus that had not previously been seen in the area.

Scientists discovered dinosaur tracks in other parts of the world as well. For example, at the Red Gulch Dinosaur Track site, they found prints that dinosaurs made during the Jurassic Period. In Bolivia, scientists found fossilized tracks at Cal Orcko.

What Can Fossil Footprints Tell Us?

Fossil footprints have been able to tell us more about dinosaurs than dinosaur fossils have. Just from footprints, paleontologists learned that dinosaurs traveled in large groups after they found several footprints together. We also learned that the young were kept in the middle of the herd so that they could easily be protected. We also know that dinosaur tails did not drag when the animal was walking. Tracks also taught us about the dinosaur’s gait and the speed at which they could walk. We know that when tracks are close together, the herd was running, and when the tracks are farther apart, they were walking.

How Do You Make or Get Dinosaur Footprints?